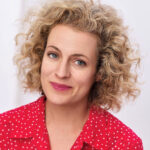 Poet and writer, artist and screenwriter, Jeanne Painchaud is the author of 11 books since 1992. These include illustrated storybooks for children and haiku collections (one published in Paris in 2011—all her other books were published in Montreal). As well, a translated version of ABC MTL was published in 2019 (Jeanne Painchaud and Bruno Ricca, translated by Katia Grubisic, Montreal, Linda Leith Publishing). In 2013, she won first prize in the international stream of the haiku competition run by Mainichi Shimbun, Tokyo’s famous daily newspaper.

Her affiliations include Haiku Canada and the Association francophone de haiku. To promote awareness of the written word in public spaces, she has conceived of and produced numerous projects for specific cultural events—such as poetry on the sidewalks and literary exhibitions, both temporary and permanent. As well, over the years, she has facilitated many writing workshops.

Invited to literary events in Quebec and internationally—in France, in Belgium, in Senegal, in Japan, and in the United States—she participated in New York’s Spring Poetry Festival in 2012 and 2013.

She lives in Montreal. She works and writes in French,and communicates easily in English.